In the past few years, one argument we have heard from many deflationists is that since the inflation spiked in the late 1970s, core CPI has constantly been making lower highs – from 13.6% in June 1980 to 2.4% in the last cycle – which suggest that we are set to reach new lows in the coming months. Falling inflation would therefore deprive yields from rising and as a response, the Fed will continuously have to cut its target rate down to zero in order to offset the bearish trend in prices. Figure 1 shows the dynamics of core CPI in the US since 1970. To the exception of 1984, inflation tends to peak when a recession hits the US economy, and therefore the rising probability of a recession in 2020 would mark the end of the inflationary pressures. 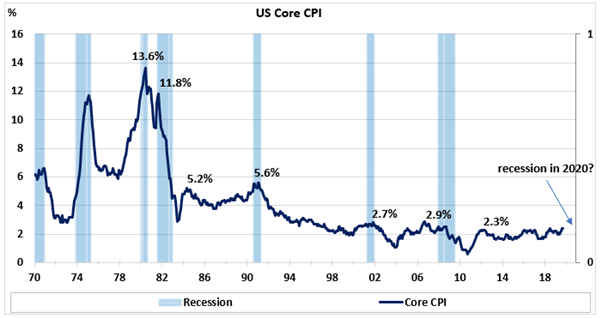 In addition, two popular indicators that tend to lead core CPI inflation by 15 months have been falling in recent months. For instance, NY Fed Underlying Inflation Gauge (UIG) has decreased from 3.26% to 2.38% in the past year (figure 2, right frame). In addition, the NFIB small business survey has also dropped in the past year by 7 points to 101.8 on the back of the mixed signals small business owners have been receiving from politicians and policymakers (figure 2, left frame).

Second, even though the relationship has significantly weakened over time, some empirical analyses have found that there is a clear link between labor costs and price inflation. Figure 3 (right frame) shows that labor cost tends to lead core inflation by 12 months and is not currently pricing in any deceleration in prices.

In addition, we are confident that an ease in uncertainty in 2020 combined with the global central banks’ rate cuts we have observed since the beginning of the year should weaken the US dollar next year. Following a 7-year rally, the broad dollar index (NEER: nominal effective exchange rate) is currently trading at the high of its 25-year range. Figure 4 shows that 125 represents a strong resistance on the index, and that we are possibly seeing the end of a long-term USD strength.

As a consequence, if the weak USD scenario starts to materialize in 2020, it could slowly increase the inflationary pressure as a currency depreciation tends to have a lag on prices. Figure 4 (right frame) shows that weakness on the dollar (USD NEER YoY) tends to be followed by some increase in core CPI in the following 18 months.

We are not speculating on the fact that inflation is suddenly going to rise dramatically in the US, but we could see a few extra upticks in core CPI in the medium term. The 2.4% resistance could actually break in 2020 and core CPI could test the 3-percent level, which would be its highest level since September 2006. Therefore, 2020 could be the year when uncertainty eases (in the UK and the US), the US dollar weakens and long-term yields continue to normalize as inflation continues to trend slightly higher in the US.

Disclosure: I am/we are long EURGBP. I wrote this article myself, and it expresses my own opinions. I am not receiving compensation for it (other than from Seeking Alpha). I have no business relationship with any company whose stock is mentioned in this article.