Is The Recent Rebound In Interest Rates Fading?

Is The Recent Rebound In Interest Rates Fading?

For much of this year through early September, a downside bias in interest rates was conspicuous. The driving force: economic pessimism. The 10-year/3-month yield curve inverted in the spring and for the most part remained below-zero, offering what is widely seen as a recession forecast. But over the last three months, the yield curve turned positive and key interest rates rebounded. But economic data doesn’t look any better today vs. the macro profile of three months ago – in fact, the economic trend has weakened slightly. Is that a clue for thinking that interest rates will resume a downward bias in the final month of 2019?

There are hints that the autumn bounce in yields is rolling over. Let’s start with the benchmark 10-year Treasury yield. After slumping to under 1.5% in early September, this rate has bounced higher, albeit modestly and, for the most part, in fits and starts, settling at 1.74% as of yesterday (Nov. 26). As you can see in the chart below, the rebound was never fully convincing, in part because the technical profile via a set of moving averages continue to reflect a downside bias.

A similar profile applies to the 2-Year Treasury yield, which is considered a proxy for near-term changes in monetary policy. In yesterday’s trading, the 2-year rate ticked down to 1.58% and the bearish profile via moving averages suggest that the path of least resistance is down for this yield.

Given this backdrop, it’s no surprise that the Treasury market’s implied inflation forecast seems to have run out of steam recently after having run higher previously. 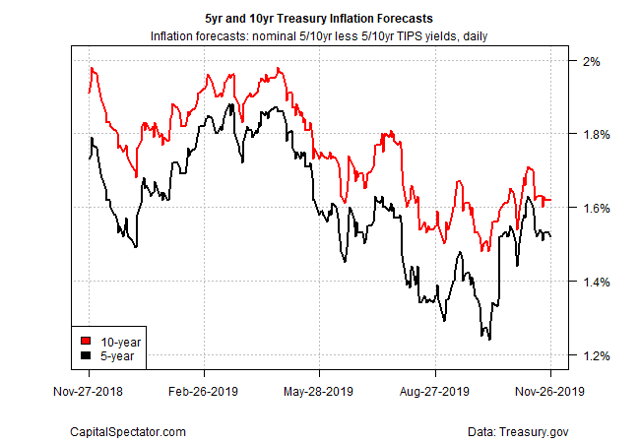 Meantime, the 10-year/3-month yield curve, although still modestly positive at 14 basis points, appears to have peaked.

What catalysts are needed to revive the faltering rebound in rates? Three topics come to mind for the short list: economic growth, inflation and the US-China trade conflict.

On the economic front, it’s clear that output growth has slowed, as this week’s update of the Chicago Fed National Activity Index shows: The three-month average slipped last month, reflecting below-trend activity that’s close to the slowest pace since the last recession. Until growth picks up, the broad economic factor will continue to cast a downside bias for rates.

Meanwhile, a steady rate of consumer inflation that’s holding at or near the Fed’s 2% target offers little reason for the Federal Reserve to lift interest rates. Core CPI has been range-bound in recent years between roughly 1.8% and 2.4% and there’s no sign that pricing pressure will break out of this box anytime soon.

That leaves the US-China trade conflict as a potential game-changer for interest rates. A resolution to the trade war would almost certainly act as an economic stimulus, in the US and abroad. In turn, it’s conceivable that interest rates would trend higher in the wake of a bullish announcement. A recent news report offers an optimistic spin on this front via prospects for the so-called phase-one deal. But expectations have moved ahead of reality, says Stephen Roach, a veteran observer/analyst of economics in Asia.

“There is a strong political incentive on both sides to cut a deal,” Roach tells CNBC. “I think we’ll look back on ‘phase one’ and wonder why we called it ‘phase one’ because we’re unlikely to see phases two, three four and anything else. This deal will be cosmetic [and] will accomplish very little for the American worker.”

Meantime, nowcasts for fourth quarter US GDP growth point to another round of softer growth. That leaves the resolution of the US-China trade war as the main source of optimism at the moment. The stock market is clearly drinking the Kool-Aid – the S&P 500 Index closed at a record high yesterday.

The bond market, by contrast, appears to be pondering a different outlook these days. The resumption of the downtrend in yields is still in its early stages and so there’s room for debate about what comes next. But with the backdrop of slow US growth and wobbly expectations for a resolution to the US-China trade war, December looks set to be a critical month for deciding if the long-running slide in interest rates will continue in 2020.

Editor’s Note: The summary bullets for this article were chosen by Seeking Alpha editors.