Despite a large stock market rally off the March lows, AT&T (T) still trades below $30. The stock offers a 7% dividend yield flipping my negative view on the stock back into the bullish camp. While the wireless giant faces some headwinds from struggling SMBs and consumers along with ad weakness at cable networks, the stock is likely to rally with the reopening of the country in full force to remove the worst possible outcomes. In addition, HBO Max is set to launch providing a long-needed catalyst. 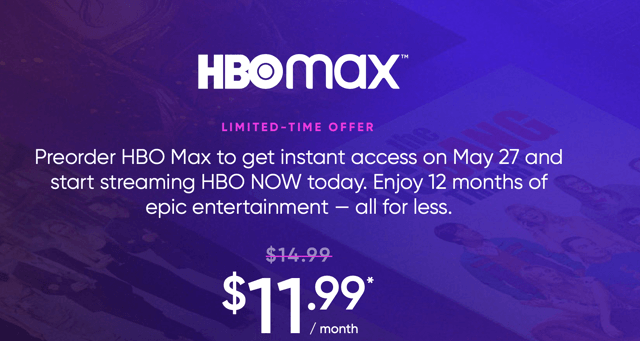 With the government throwing trillions at the economy and the recent snapback rally of the stock market, the worst-case scenarios have to be thrown out. Along with Q1 earnings, AT&T forecast free cash flows remaining in the $24 billion range.

The amount is a big hit from the $28 billion target entering the year, but the wireless giant will still have up to $9 billion in excess cash flows after paying the $15 billion annual dividend payout. Even under a negative scenario presented in late April when the virus fears were still high, AT&T has plenty of cash flows.

As CEO Randall Stephenson highlighted on the Q1 earnings call, AT&T expects to repay debt in this environment:

We will continue investing in our critical growth areas like 5G, broadband, and HBO Max. We remain committed to our dividend. In fact, we finished last year with our dividend as a percent of free cash flow a little over 50%. And even with the current economic crisis, we expect the payout ratio in 2020 to be in the 60s, and we are targeting the low-end of that range, which is a very comfortable level for us. And last, we will continue to pay down debt and maintain high quality credit metrics.

The potential reduction in cash flows is disappointing, but the financial metrics close to the lows of the economic downturn don’t support the very high dividend yield. AT&T now has a dividend yield at 7%, which is where the yield has peaked multiple times over the last decade.

In both the previous examples, the dividend yield quickly dipped back towards the 5% range over a short time period of 1-2 years. Whether after the financial crisis or in the midst of the leveraged buyout of Time Warner, once the fears were gone, the stock quickly rallied back to where the dividend yield was more normalized around 5%.

As of March 31, the company had $154 billion in debt and the best part of the crisis is that AT&T management has been scared away from stock buybacks and back to repaying debt. The biggest outcome of the virus is that the market and government will come down negatively on financial support in the future for companies repurchasing shares with large debt loads.

The company is at no risk of not being able to repay the debt with the upcoming maturities over the next few years, but AT&T shouldn’t place the stock in a position of risk. Over the next four years, the wireless giant averages over $10 billion in annual debt maturities that any market crash from another virus outbreak could place the company in a precarious position for no reason. 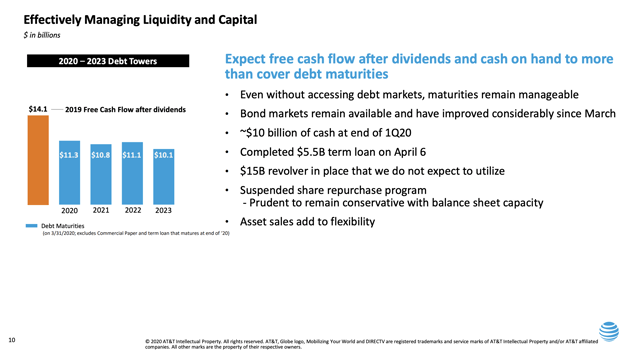 AT&T is finally set to launch HBO Max on May 27. Any positive metrics from subscriber additions for the video streaming service would boost the stock.

Other services initially added millions of new subs, but WarnerMedia doesn’t even forecast the addition of more than 2 million subs to a HBO service with 34 million domestic subs already.

Within 5 months of the launch of Disney+ last November, Disney (DIS) had added 54.5 million domestic subscribers. The upside potential for AT&T is an ability to add far more HBO Max subs this year than forecast, considering Disney had originally targeted a sub total of 60 to 90 million by 2024.

The shift to a focus on subscriptions by AT&T and away from advertising is a positive when TV ad dollars are expected to plunge in the Fall. The problem is that HBO Max has no momentum to warrant a bullish thesis for AT&T shocking the market with higher sub totals.

The social media numbers appear to confirm HBO Max has failed to gain any attraction heading into the launch on May 27. Streaming customers are most likely to come from the social media space.

The key investor takeaway is that AT&T won’t trade below $30 and offer a dividend yield at 7% much longer. The HBO Max launch this week is a potential catalyst for a much higher stock move, but the wireless and media giant has a huge hurdle to generate the revenues needed to impress investors into paying more for the stock. The more likely outcome is for AT&T to bounce into the low $30s over the next month, providing shareholders with a solid 10% capital gain from here and the 7% dividend yield.

Looking for a portfolio of ideas like this one? Members of DIY Value Investing get exclusive access to our model portfolios plus so much more. Sign up today to see the stocks bought by my Out Fox model during this market crash.

Additional disclosure: The information contained herein is for informational purposes only. Nothing in this article should be taken as a solicitation to purchase or sell securities. Before buying or selling any stock you should do your own research and reach your own conclusion or consult a financial advisor. Investing includes risks, including loss of principal.