Whether To Give Up Dumpster Diving Whether To Give Up Dumpster Diving

A friend of mine, who had a great ten-year plus career on Wall Street, including a nice stint at the famed hedge fund, Paulson & Company, has a great phrase ‘Dumpster Diving.’ Because of his success and the fact he doesn’t have children (at least not yet), he was able to ‘opt out’ of the rat race and comfortably take a four-year sabbatical (where he didn’t need to earn a paycheck). What he means by ‘dumpster diving’ is speculating in low-quality businesses, often with market capitalizations less than $100 million. For me, however, as a deep value investor, the appeal of buying a business after it is down at least 90% from its all-time highs and trading at well below its replacement costs or book value is akin to trying to buy something for $0.10 on the dollar in hopes of selling it for $0.20 on the dollar. It is great when it works, but much harder than it looks on TV.

As my friend (the former Paulson & Co. analyst) and me both love investing, we periodically get into spirited discussions on this very topic of dumpster diving. He is a practitioner from the school of thought that it is a massive waste of capital and precious bandwidth to engage in dumpster diving. I, on the other hand, have argued that this is the most inefficient part of the stock market as the lack of liquidity and the fact that most market participants avoid ‘slumping it’ in these dodgy stocks can create opportunity.

That said, Saturday night’s news that Tuesday Morning (TUES) is preparing for a bankruptcy filing has made me once again re-examine the very premise of dumpster diving. And as someone that has a 4% sized bet on Tuesday Morning and a cost basis of $0.40 per share, I am an interested observer. 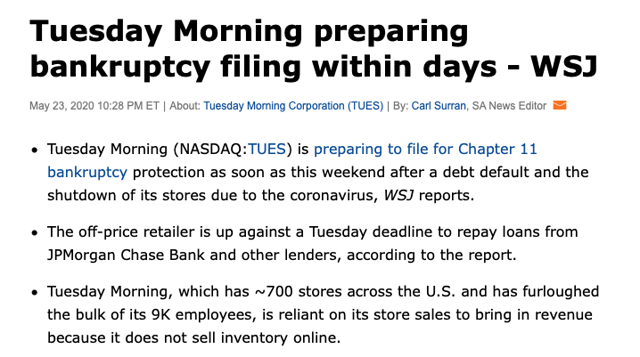 That said, and SA news reporters do a great service to readers with their timely coverage of breaking news, I do want to slightly split hairs.

As I have a WSJ online subscription, it was also reported that the company is trying to sell the business. This is a very important nuance that was left out of the SA bullets.

The off-price retailer is preparing to try to sell its business out of bankruptcy, one of the people said.

As an author that has written two recent pieces on Tuesday Morning, I know the company reasonably well:

To sum up my bullish arguments:

My theories are great in the classroom, but the rubber meets the road on Tuesday, March 26th, and during the ensuing weeks.

As an aside, SA Contributor, and famed and successful dumpster diver, Tim Stabosz, had some fairly pointed comments on the potential bankruptcy filing. I am a fan of Tim, think he is a smart guy, and tend to agree with his commentary here. 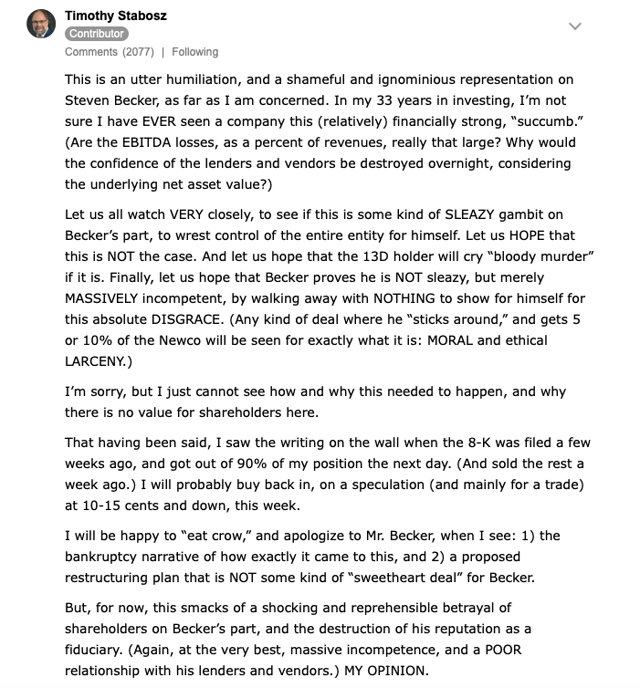 Setting Tuesday Morning aside, as it is only a 4% sized bet in my portfolio, however unpleasant, I do need to re-examine if I should simply reconsider and stop pissing into the proverbial wind. Although there is a lot of intellectual satisfaction when you get one of these tricky situations right, as most market participants are unwilling to traverse this type of rugged terrain, perhaps my capital and bandwidth could be better utilized playing in better places and picking more fertile grounds to farm. Unlike at the Olympics, where a gymnastics program or skating program gets higher marks for degree of difficulty, Wall Street doesn’t give out style points.

For example, back in March 2018, I got involved in another dicey business, Christopher & Banks (OTCQX:CBKC). Until that point, I never invested a dime in the business as I never viewed it as compelling, as other value investors suggested it to me at much higher prices and back in 2017. However, when I learned that Keri Jones had left her job as Chief Merchant of DICK’S Sporting Goods (DKS), after she had a great career at Target (TGT), my intrigue turned into a purchase. Besides, at the time, CBK had plenty of cash, no debt outside of a sale leaseback on its corporate HQ and operating leases. Candidly, even though I was buying it at what I thought was a very low valuation and well below its replacement cost, my initial purchase at $1.20 proved way too high. As I did more work, my confirmation bias grew stronger. I replayed the situation in my mind and decided to slowly keep adding (famous last words).

My thought process was as follows:

Coming into December 2018, I was way out over the tips of my skis and long way too many shares of CBK with a cost basis in the low $0.60s per share. Next thing I know, on December 20, 2018, we learned that CBK’s board and management received an unsolicited takeover bid for $0.80 per share in cash. 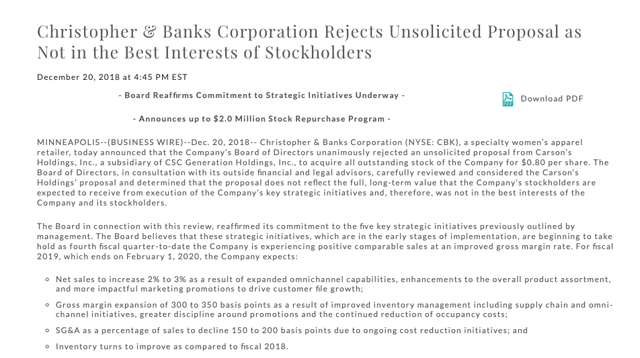 I was elated when I saw the news, as remember, my cost basis was in the low $0.60s. Given the number of shares that I owned, I stood to make a nice profit (well over $10K). Lo and behold, I learned all about Agency Bias, the hard way and from the school of hard knocks, as CBK’s board and management team summarily rejected the buyout. Despite CBK’s burning tons of cash in FY 2018 and clear evidence that its platform was burning, management thought the turnaround was firmly in place. Had I not been snake-bitten by Confirmation Bias, I would have come to my sense and realized that (as these thoughts crossed my mind, but I never acted on them):

Moreover, as fate would have it, it turned out that the weather in the Midwest was super cold throughout January 2019 and CBK’s Q4 ending January 2019 was underwhelming.

During most of 2019, the stock goes on to crash and the company reports a lousy Q1 2019 and Q2 2019. Exasperated after watching a would-be nice profit turn into a big loss, I capitulated in the summer of 2019, the day President Trump announced more tariffs on China. To add insult to injury, in Q3 2019, always CBK’s best seasonal quarter, the company puts up a $2 million + positive Adjusted EBITDA quarter. The stock leapt from $0.15 to the high $0.60s in December 2019. There is no worse feeling than sticking with an idea way too long, sizing it way too aggressively, selling it for a big loss, and then watching it rally 8X from where you sold it ($0.082 to $0.67).

Taking a step back, this begs the question that my good friend, the guy who worked as analyst for famed billionaire John Paulson, put to me: Why are you wasting your bandwidth dumpster diving?

Although the outcome is far from certain, I might actually make money on my Tuesday Morning bet, should there be a bidding war in bankruptcy, as Ken Traub’s stake and upwards of $60 million of real estate are compelling. That said, regardless of this particular outcome, I do need to seriously reconsider if I am wasting lots of capital, bandwidth, and talent dumpster diving.

As it is never good to make knee-jerk and emotional decisions based on a bad event, like a bankruptcy filing, I need more time to think about it. Again, reactionary decisions are usually bad ones.

Also, I own some stock in Francesca’s (FRAN) with a cost basis of $2.45 (I sized it at 3%). I am super impressed with FRAN’s new CEO Andrew Clarke. However, I was super impressed with Keri Jones and despite her talent, that didn’t work out so well for me. Maybe Francesca’s is different as it has an open inventory purchase order as CEO Clarke deftly cancelled all open receipts when he started on March 9, 2020. I need to think more about the bet. Moreover, if Andrew Clarke successfully turns around Francesca’s, the stock could go up 5X (or more).

Before I wrap up this note: As far as we know, Tuesday Morning has never, at least publicly, been on the auction block. This might be rosy-colored glasses thinking, but how do we know that the Chapter 11 process doesn’t become a catalyst for a private equity bidding war? Crazier things have happened.

Either way, regardless of whether I do quit dumpster diving, I can’t stress enough that SA readers need to take stock of their own Confirmation Bias and not underestimate the major force of gravity – called Agency Bias. I would argue that confirmation bias costs people so much money that it isn’t even funny. Moreover, agency bias is alive and well in corporate America and it is everywhere, so don’t have to look very far to find it.

Second Wind Capital is a catalyst-driven/trading-oriented service with an underpinning tied to value and out-of-favor sectors. The hold period can range from a few days to up to six months (sometimes longer if my conviction level for a particular thesis is elevated and fundamentally and tangibly intact). Risk management perimeters will be set based on position sizing and/or stop losses. No one bats a thousand, so if you can get it right 51% of the time and you manage your risk, you will generate out-sized returns. Join now with a 2-week free trial and follow my real-time porfolio.

Disclosure: I am/we are long TUES. I wrote this article myself, and it expresses my own opinions. I am not receiving compensation for it (other than from Seeking Alpha). I have no business relationship with any company whose stock is mentioned in this article.