This article is part of a series that provides an ongoing analysis of the changes made to David Einhorn’s Greenlight Capital 13F portfolio on a quarterly basis. It is based on Einhorn’s regulatory 13F Form filed on 05/15/2020. Please visit our Tracking David Einhorn’s Greenlight Capital Holdings article series for an idea on his investment philosophy and our previous update for the fund’s moves during Q4 2019.

Greenlight Capital’s 13F portfolio value stood at $702M this quarter. It is down ~48% compared to $1.35B as of last quarter. Einhorn’s Q1 2020 letter reported that the fund returned negative 21.5% for Q1 2020. This is compared to negative 19.6% for the S&P 500 Index. In addition to partner stakes, the fund also invests the float of Greenlight Capital RE (GLRE). To learn about David Einhorn and the perils of shorting, check out his “Fooling Some of the People All of the Time, A Long Short (and Now Complete) Story”.

Note: Greenlight maintains a hefty short book. Short stakes currently held include Tesla (TSLA) and Netflix (NFLX). Their Q1 2020 letter talked about closing short positions in Celltrion and DexCom (DXCM) along with most of their “bubble-basket” shorts (the puts expired in January).

Change Healthcare (CHNG): CHNG is a large (top five) 7.53% of the portfolio position purchased at a cost-basis of $11.40. The stock currently trades at $12.32. The thesis is on the idea that 9x estimated FCF valuation is compelling for a company that can be termed “backbone of healthcare internet”. Also, they are poised to grow in the coming years.

Note 1: The position had a ~9% IRR over a holding period of roughly five years. Greenlight had a previous successful roundtrip with GM: A ~10% stake was disposed in Q1 2014 at an average exit price of $35.76 compared to an average entry price of $23.87.

Note 2: In March 2017, Greenlight proposed GM shares be split into two classes (one with dividend and the other without) but management rejected the plan. In response, Greenlight nominated three members to the board but GM shareholders rejected the proposal and the nominations in June.

DXC Technology (DXC): DXC was a medium-sized 2.27% of the portfolio stake established last quarter at a cost-basis of $36.54 and disposed this quarter. The stock currently trades at $15.48. Overall, the position resulted in a small loss.

Note 1: Greenlight commented on this position on their Q1 2020 letter: The valuation is very cheap and there is a large buyback in place that should allow them to retire ~25% of the shares this year.

Note 2: BHF is a spinoff of MetLife’s (MET) U.S. Retail business (annuities and life insurance) that started trading in July 2017.

Note: Greenlight’s bullish thesis pivots on the fact that they have plenty of near-term liquidity and ~70% of their planes are unencumbered. Given the policy response from most governments, most airlines should avoid bankruptcy and honor lease obligations.

Note: The prices quoted above are adjusted for the spinoff of CONSOL Energy in November 2017.

Note 1: The main businesses of Chemours are Titanium Dioxide and Refrigerants both of which are under pressure. Despite that, as of last September, Greenlight believed CC had $8.50 earnings power for 2021. This is compared to Wall Street estimates of $3.20 and $3.99 for 2020 and 2021, respectively. Also, Greenlight believes the PFOA liability concerns are overrated – PFOS liability is more of a risk factor and Chemours has minimal exposure there.

Note 2: Greenlight had a very successful (4x returns) previous roundtrip with Chemours in the two-year period that ended in Q1 2018.

Exela Technologies (XELA): In July 2017, Quinpario Acquisition (a SPAC that had an IPO in January 2015) merged with HOV LLC and Novitex Holdings (financial technology services provider) to form Exela Technologies. Greenlight has a 5.3% ownership stake in Exela. The stock started trading at ~$10 and currently goes for $0.35. The 0.22% portfolio stake saw a ~7% trimming this quarter.

Green Brick Partners (GRBK): GRBK is currently the largest position at ~28% of the 13F portfolio. The stake was acquired as a result of BioFuel Energy’s JGBL Builder Finance acquisition and rename transaction. The deal closed (October 2014) with Greenlight owning 49% of the business. David Einhorn was appointed Chairman of the Board following the transaction.

Note: Greenlight’s recent letters have discussed this position: The stock trades at a cheap valuation. They expect single-family housing to emerge as a post-pandemic secular winner. Revenue has tripled since 2014 and the business (diversified homebuilding and land development) has industry-leading margins and low Debt/Capital.

CONSOL Coal Resources LP (CCR): CCR is a 4.46% portfolio stake. Greenlight controls ~35% of CCR. The position came about as a result of Consol’s coal spinoff in 2015. The stock started trading at ~$15 and currently goes for $4.21.

The spreadsheet below highlights changes to Greenlight’s 13F stock holdings in Q1 2020: 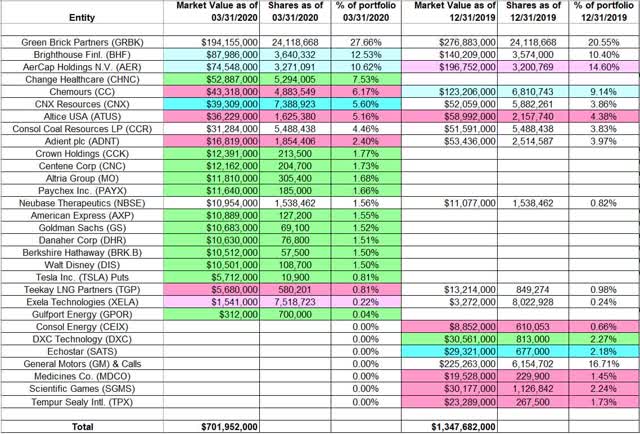 Disclosure: I am/we are long BHF, BRK.B. I wrote this article myself, and it expresses my own opinions. I am not receiving compensation for it (other than from Seeking Alpha). I have no business relationship with any company whose stock is mentioned in this article.