To say that the market dislocations we’ve witnessed in the past few months have been historic is a bit of an understatement. That is particularly true with vehicles like mortgage REITs, entities that generally employ leverage to borrow at one rate and invest the proceeds at a higher rate. When markets melt down, like they did in March, vehicles like mortgage REITs have nowhere to hide. This was acutely obvious when UBS had to close two of its popular leveraged mortgage REIT ETFs because of nearly complete evaporation of value.

However, prices around the sector have come way down, including New York Mortgage Trust (NYMT), the chart for which you can see below. The trust has seen its share price double since the lows in March, and while plenty of risks exist, I think it offers a favorable risk/reward balance today. I’ll say again that this isn’t for the risk-averse investor, and any position in this stock should be small due to the risks imposed by the COVID-19 crisis. That said, I’m bullish.

Just how bad is it?

The answer to that question is pretty obvious; it’s worse than it’s ever been for mortgage REITs. The CEO said as much in the Q1 earnings release, and the share price would seem to suggest that is exactly how bad things are. Below, New York Mortgage Trust was kind enough to put together a rather long list of things that are making its life harder these days. 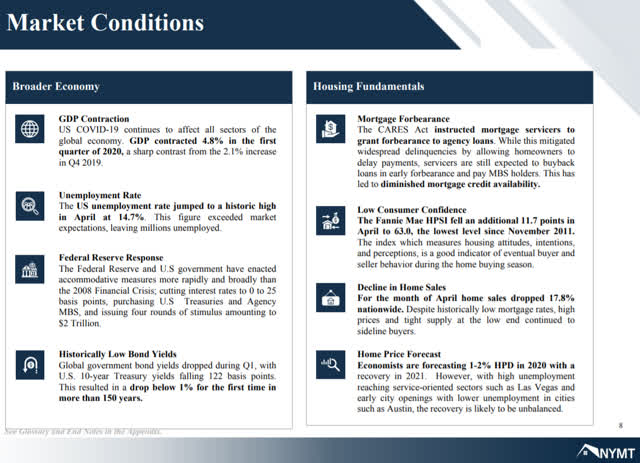 GDP contracted strongly in Q1, but Q2’s contraction will be otherworldly given that shutdowns began in earnest in March in the US, so January and February would have been largely normal. April and May will almost certainly show unprecedented contractions, with June still up in the air depending upon how reopenings go.

The downstream impacts of this are above, including lower consumer confidence, which results in lower spending, which then exacerbates the GDP downturn. That leads to lower yields on risk-free assets, declining home prices, high unemployment, and emergency programs.

None of these things is good for a mortgage REIT, as it means higher defaults and deteriorating market conditions, among other things. Pricing for mortgage-backed securities – and a host of other assets – went into freefall in Q1 and into Q2, which is why the share prices of mortgage REITs were absolutely crushed.

In other words, things are very rough. The good news (I suppose) is that New York Mortgage Trust has done a lot in the past couple of months to shield itself from the inherent impacts of what was laid out above. 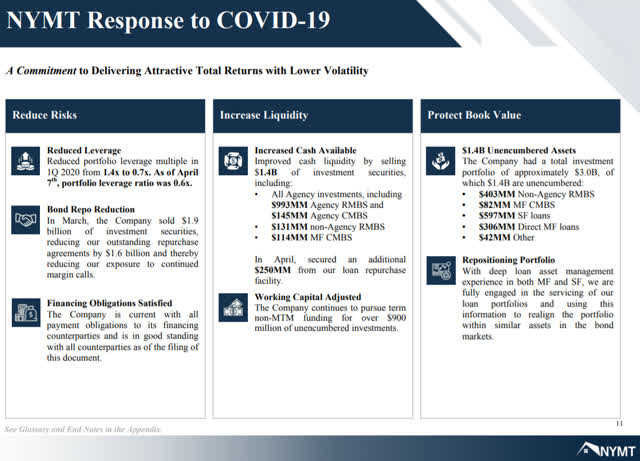 The trust cut its leverage by half, from 1.4x to 0.7x during Q1, an unprecedented decline. The trust sold its entire Agency portfolio, formerly comprised of RMBS and CMBS, as well as non-Agency RMBS and CMBS. It also boosted liquidity and its balance sheet by issuing 85 million new shares during the quarter. The overall theme of these actions, among others, is to reduce the risk of further mark-to-market losses, and position the trust for an eventual return to positive earnings. These actions are drastic, but it certainly seems they were warranted given the situation the trust finds itself in today.

New York Mortgage Trust reported horrendous earnings for the first quarter, with very little good news. Below is an in-depth look at the trust’s portfolio change during the quarter, which is pretty telling. 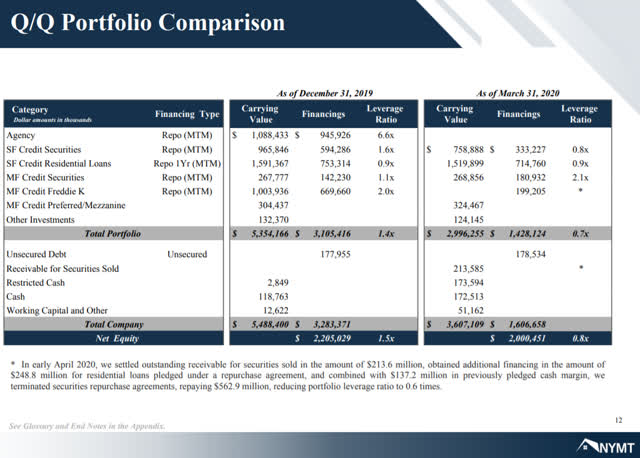 Agency securities fell from $1.1 billion to nothing as the entirety of the portfolio was divested in Q1. Single-family credit securities were down from $966 million to $759 million, while single-family residential loans were down only slightly, and now make up half of the total at $1.5 billion. The multi-family portfolio underwent significant change as well, and the net impact is portfolio carrying value decline of ~$1.9 billion to $3.6 billion.

This de-risking should help insulate New York Mortgage Trust from enormous mark-to-market losses in the near-term, hopefully avoiding a repeat of the first quarter. It also has reduced the earnings power the trust will have moving forward as it is working with a much smaller portfolio with half the leverage it used to operate with. On balance, however, the trust did what it needed to do to survive unthinkable conditions in the markets it operates in.

Turning to book value, which is critical for REITs of all types, New York Mortgage Trust suffered immensely in Q1 with its worst performance ever. 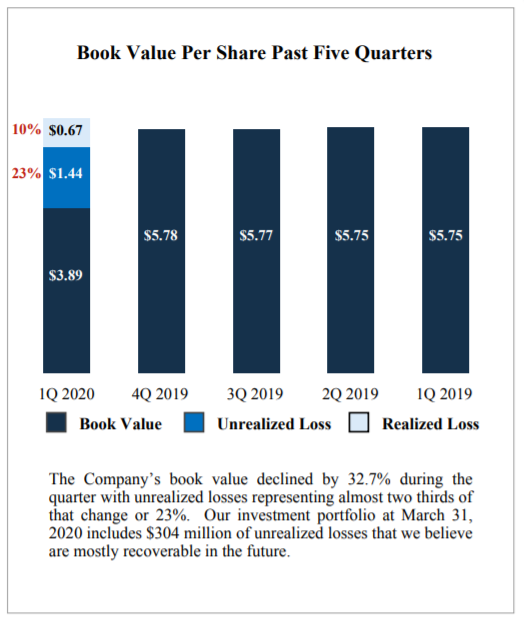 Book value declined from $5.78 at the end of 2019 to $3.89 at the end of March. While 67 cents of the decline was due to realized losses on divested securities, there was a $1.44 per share decline on unrealized losses. While these mark-to-market losses were appropriate to record during Q1 due to financial market conditions, I have to think we’ll see most or all of that recovered in the ensuing months. The dislocation that caused these unrealized losses has abated somewhat already, so it seems logical that at least a dollar of the $1.44 should be recoverable in the not-too-distant future. That bodes well for the share price as it is under $2 today on what should be normalized book value of ~$5 per share.

What’s interesting – and supportive of my view that book value should rebound fairly quickly – is that yield spreads have actually moved up of late. New York Mortgage Trust has been able to reduce its financing costs while seeing less deterioration in interest on earning assets. This virtuous combination has helped boost net interest margin from 2.4% a year ago to 2.9% in Q1. 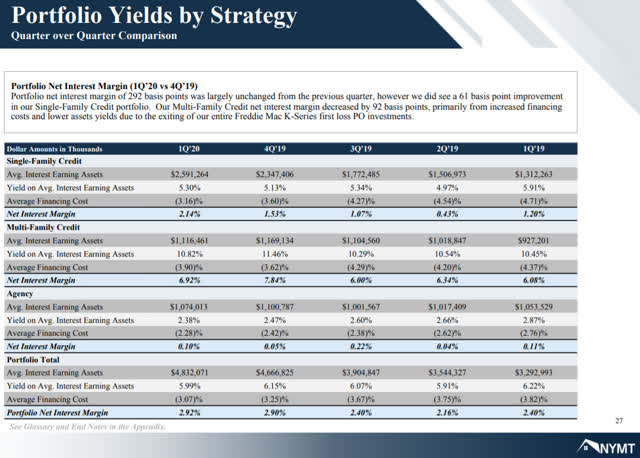 This is an extraordinary achievement, and while some of this may be unwound if/when short-term rates rise again, it is coming at the best possible time for New York Mortgage Trust as it tries to dig itself out of the rubble.

I’ll say it one more time, there are immense risks in buying any mortgage REIT today as the sector has been blown to bits by the COVID-19 crisis. However, prices today suggest that the sector may never recover, and while that’s a possibility, New York Mortgage Trust is so cheap that I think it is worth a look.

We saw that the share price is right at half of Q1 book value, but on normalized book value of $5+, it is more like 40%. Either way, the stock is pricing in a huge amount of further losses that I don’t think is reasonable.

Turning to analyst estimates, things are looking up there as well. 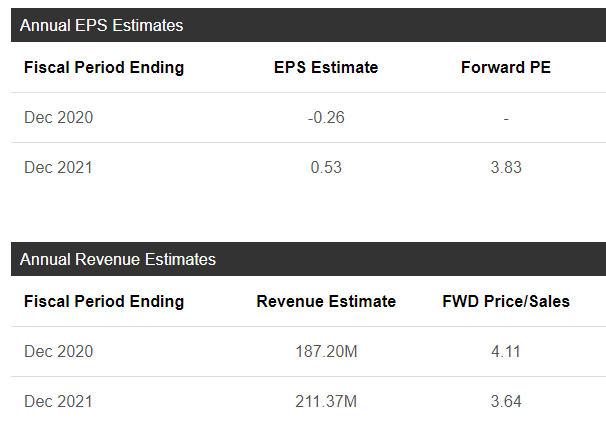 Revenue is expected to increase sharply next year, and losses should have abated before then, causing a significant boost in earnings for 2021. Make no mistake that this year is going to be ugly. However, I think – based on the points made above – that the worst has already passed for New York Mortgage Trust. I also think the share price is reflecting a negativity that is unwarranted at this point.

I therefore believe we’ll see New York Mortgage Trust trade higher, much closer to book value, particularly if earnings rebound to some sort of normalized level for next year, and the dividend can be reinstated. While nobody knows for certain if that will happen, conditions appear to be in place for such a rebound to my eye. For that reason, New York Mortgage Trust is a speculative buy after Q1 earnings.

Disclosure: I/we have no positions in any stocks mentioned, but may initiate a long position in NYMT over the next 72 hours. I wrote this article myself, and it expresses my own opinions. I am not receiving compensation for it (other than from Seeking Alpha). I have no business relationship with any company whose stock is mentioned in this article.