The ship may be turning for the good regarding revenue growth in Amyris (AMRS). However, woes on substantial SG&A expenses, equity dilution, the CVI heights convertible debt payment default, and poor recent operational performance suggests that it is too early to jump on the ship. It is best to avoid the stock for now.

John Melo, AMRS’s CEO, mentioned in the 2Q 2019 earnings call that in Q3 2019, the company is expecting revenue from renewable products at $24 million, equal to the segment revenue for the first half of 2019. John also mentioned that another critical revenue driver would be sales in the Clean Beauty segment. He expects to finish 2019 with Clean Beauty total sales between $50 million and $60 million, more than double compared to 2018.

Another revenue driver will be Pipette, AMRS’s new baby care brand launched in September 2019. While John did not provide much color in the earnings call, he mentioned that the brand has already more customers than Biossance had at the same stage of development. AMRS is using Amazon and Walmart.com as sales channels, and management expects a rapid revenue ramp through the rest of the year. Delving into Amazon.com, it is worth mentioning that the Pipette Baby Lotion has three reviews, the Pipette Baby Shampoo + Body Wash has one review, and the Pipette Baby Wipes has four reviews. It seems like it is a wait-and-see approach regarding Pipette. For instance, the competition in the baby shampoo segment will be fierce, as Puracy and Babyganics have substantial review rates on Amazon, and their products are significantly cheaper compared to Pipette. 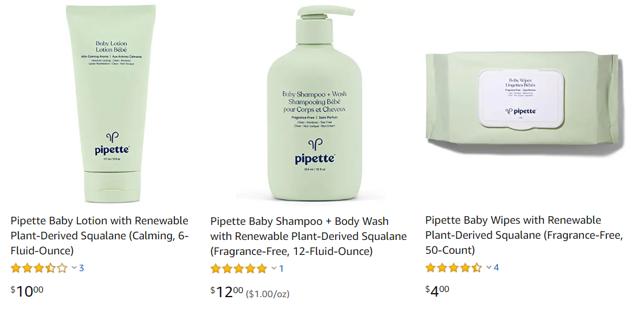 A concern from AMRS is the high SG&A costs. According to its most recent 10-Q, the company spent $30.8 million in SG&A, up from $19.4 million a year ago. However, since the company’s majority of revenue comes from licenses and royalties, it would make sense for research and development to be the highest operating cost as opposed to SG&A. However, it is not.

Another critical issue from AMRS is the issuance of common stock. The company entered Q2 2019 with 77.2 million shares. In 2Q 2019 alone, AMRS issued approximately 24 million shares. It is important to note that the issuance of common stock brought almost no additional paid-in-capital. What is more is that further dilution is on the horizon, as will be explained further in the long-term debt section.

One last concern worth mentioning is the default on CVI heights convertible debt payment. AMRS’s management is working to reach terms with CVI, so that management can close the chapter and focus on the future. John mentioned that AMRS expects to find a solution soon.

In brief, revenue prospects seem appealing. However, the concerns around the high SG&A costs, equity dilution, and the default on the CVI heights convertible debt payment are substantial. The following section delves into AMRS’s recent operational performance to understand its financial history.

AMRS’s operational performance is not exciting

Nothing is exciting about ARMS’s operational performance, according to the DuPont ROE analysis. The ROE only describes how many dollars of net income is the company producing per dollar of shareholders’ equity. However, it does not provide color on what is driving the efficiency. The DuPont ROE summary allows for the pinpointing of the efficiency drivers. Thus, companies may implement strategies aimed at improving such drivers. The DuPont summary provides an overall picture of the company’s tax and interest burden, operating income margin, asset turnover, and equity multiplier. The inputs and results are shown in the following tables. The amounts are in millions unless otherwise noted.

Image created by the author. Data collected from YCharts

Image created by the author. Data collected from YCharts

In brief, AMRS’s operational efficiency is horrible, as the ROE is negative. Next, the efficiency drivers and their implications will be described.

The next driver is the asset turnover, which measures how efficiently the company produces revenue per dollar of assets. Since the assets have remained relatively unchanged at $123 million, and revenue has soared as previously mentioned, the asset turnover ratio has improved from 0.1 in Q2 2018 to 0.5 in Q2 2019, a positive note for investors.

Lastly, equity multiplier is a form of leverage, which considers short-term and long-term liabilities. In ARMS’s case, there is not much worth analyzing since the company has had a shareholders’ equity deficit over the past six quarters.

In brief, AMRS’s operational performance picture looks horrific. Any form of investing in AMRS should be regarded as extremely speculative.

If the company has had a shareholders’ equity deficit over the past six quarters, how has it survived? John Doerr has been funding the company. Recently, AMRS agreed with Foris Ventures, LCC, an entity affiliated with director John Doerr of Kleiner Perkins Caufield & Byers, to increase the Loan and Security Agreement (LSA) by $10 million on October 10, 2019. The company borrowed the extra $10 million under the LSA the following day. Currently, there is an $81 million aggregate principal amount of loans outstanding under the LSA.

The bad news for investors is that the company also issued a warrant to Foris to purchase over 2 million common shares at an exercise price of $2.87, which means equity dilution. What is interesting is that on October 11, 2019, the stock price closed at $3.65. Therefore, the company is already giving a 27.1% return on the stock price, which translates to a profit of $1.56 million to Foris. The warrant has a clause mentioning that

Foris may not exercise the warrant to the extent that, after giving effect to such exercise, Foris would beneficially own in excess of 19.99% of the number of shares of common stock outstanding, unless the company has obtained stockholder approval to exceed such limit.

It seems, however, that Foris can force the company to obtain stockholder approval to exceed the limit due to the substantial equity owned by Foris.

In brief, the company seems to be on the right track regarding revenue increase. However, the headwinds regarding the substantial expense in SG&A as a percentage of revenue, the equity dilution, the default on the CVI heights convertible bond, and the poor operational performance prompts for a neutral stance in the stock. The ship may be starting to turn for the good, but it feels too early to jump on board. Therefore, it is best to sit on the sidelines for now.

Additional disclosure: The opinions expressed herein are the author’s sole views, and they do not constitute investment advice in any form. Past performance may not be indicative of future performance. Always do your due diligence, and determine if the investments mentioned here suit your risk tolerance and objectives, your return objectives, and your personal constrains.